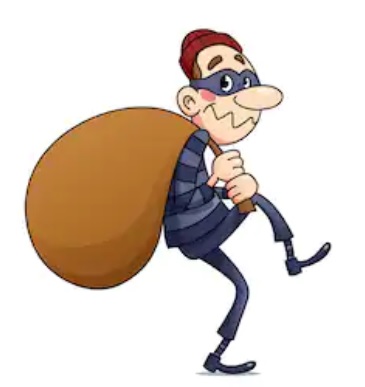 We all do it. There are things that seem harmless to take, and we all indulge at one point or another.  The little bottles of toiletries from the hotel, (Hey, they’re there for us to use, right?!?) the pens and paper from the corporate office, the sugar packets at the restaurant.  These are some of the most commonly stolen items out there.  A friend of mine once grabbed a fist full of tampons from a public bathroom, while looking me right in the eyes, saying, “Don’t judge me!”

Events are a smorgasbord of items ripe for the taking.  Some items are expected to walk away, like anything from the bathroom hospitality basket.  Although, people can go a bit overboard with this, taking more than their fair share, leaving little else for the guests who actually need things like bandages, safety pins, and hairspray. Here are a few examples of things that have been stolen from events that have a bit more significance, or could be costly to the hosts of the occasion:

Our friend Susan Childs at Select Event Group has shared with us a bit of her experience with items gone missing.  Her team of delivery men diligently inventory everything they drop off and pick up, and it’s not uncommon for there to be fewer items on the way back.  Sometimes a napkin goes missing, or a rental table gets mixed in with the ones the venue owns.  But sometimes it’s not something that is innocently left behind.  Look inside that lady’s purse over there, and you’ll find a FULL set of flatware! Or look in that girl’s pocket. It’s a shantung napkin!  Something to remember the event by, I suppose… I never understood what someone planned to do with a single set of flatware, or a one-of-a-kind napkin.  But it happens!  The frustrating part is the client often gets billed for the missing items, and replacement costs can be high.

I can recall a specific wedding where the bride’s bouquet walked off the property. It had been on display on the sweetheart table during dinner, but when a surprise groom’s cake was presented on that table later in the evening, we relocated the bride’s bouquet to a side table in the pre-function space.  (Totally our fault, and a big lesson learned: We should have placed it directly in her hotel room upstairs.)  As guests left the hotel for the evening the bouquet went missing.  This could have been something the bride shrugged off under other circumstances, but this bouquet had a locket with a photo of the bride’s late father attached to it.  After the wedding, when we realized the bouquet was missing, we had hoped that whoever took it would realize it had obvious sentimental value, and they would promptly return it.  But no one was coming forward for days, even though I was sure it was going to turn up with a guest or bridesmaid who thought she was doing the bride a favor by picking it up for her.  We asked the hotel security team to look through surveillance footage and let us know if they saw anyone leaving with a bouquet.  All we found, after hours of combing through video, was each bridesmaid leaving with their own flowers.  It was during a chance conversation at work the following Wednesday when the groom was telling some friends about how devastating the loss of the bouquet was, when a co-worker who had attended the wedding came clean.  She claimed she didn’t realize it had so much significance. (Hard to believe, with the locket on it!) But she returned it right away.

Yep.  You read that correctly.  While working at a banquet facility in my earlier days in the industry, we had a very… spirited (read: drunk)… maid of honor on our hands.  At the end of the night, she was appalled that our staff wasn’t waiting hand and foot on the entire wedding party to make sure they got their personal belongings out to the cars.  We did our due diligence to collect all the gifts, personal belongings, and décor provided by the client, and put them in the lobby so the parents of the bride could take everything to the car.  This was standard practice for our venue.  The maid of honor, who was the sister of the bride, and newly married at the time (thus an EXPERT in all weddings) couldn’t believe we weren’t carrying everything out to the car for them.  Now, a wedding planner/coordinator would certainly do this.  But as a venue/caterer, that wasn’t expected of us, and we focused on other duties of closing out the event.  The maid of honor was so disgusted, she felt like we owed her something.  That something was the table lamp that she passed in the lobby on her way out.  She grabbed it as she left, plug still in the wall.  I quickly snatched it right out of her hand, and she didn’t even notice.  I hope she had a safe ride home that night!

There are plenty of venues that allow clients to provide their own alcohol for events.  It’s a great way to manage event costs.  An added plus: You get to keep the leftovers or return unopened product to the liquor store for a refund!  Many venues require the bar to close 30 minutes prior to the end of the reception, which means the alcohol can get packed up and loaded into the client’s car before the event ends.  I remember one event where we had all the alcohol (cases upon cases!) loaded onto a hand truck, ready to take down to the car, when the guests began to depart in large groups.  A guest thought the hand truck was loaded with “party favors,” and he grabbed an entire case of beer, saying, “Don’t mind if I do!”

Apparently, some people want to always remember that they were seated at table 16 at the wedding they went to in 2017.  That’s all I have to say about that.

I can say with confidence that I’ve never known any gifts to be stolen from an event that Plan It Perfect oversaw.  Yet, it’s the biggest theft concern of any of our clients.  I honestly don’t think it happens as much as people think.  But when it does, I can assure you it’s an inside job by one of the guests.  Probably the date of a guest, in fact. People get so concerned about event staff stealing gifts from a wedding.  It just doesn’t happen, in my experience.  Think about it.  These people have jobs that they want to keep.  Would I still have clients recommending me to others if I had a penchant for emptying envelop boxes?  Guests are the most concerned about this, by the way.  They watch the pile of gifts like a hawk to make sure their gift is still there!  I’ve even had people approach me at the end of an event, after we’ve put everything into the client’s car to take home, exclaiming that ALL the cards have gone missing!! No, sir, I just did my job and put everything where it is supposed to go…

Sure, it can happen, especially at events that take place in venues where other events are happening simultaneously.  You might see some cross-over traffic between events, and someone from another function will pop in and grab something (or help themselves to a more exciting open bar.)  But if the correct precautions are taken, and you don’t have guests who are thieves, you really don’t have to worry about gifts walking away.  Don’t overthink it.

Have you ever heard of anything being taken from an event? Leave a comment below!