How to Include People Who Can’t Attend Your Wedding

As we plan special events, particularly weddings, we often have our guests in mind.  Does anyone have special needs for access?  Are there dietary restrictions that need to be considered?  But we also think about the loved ones who aren’t able to attend.  And it can be just as important to some people to make sure their absent guests are acknowledged.

I grew up in Annapolis, so I’ve always been around military families.  One common reason for not being able to attend a wedding is deployment.  The military, unfortunately, doesn’t care what’s on your social calendar, so it’s a not-so-rewarding part of serving the country to miss special events.  One of my sponsor-sisters from the Naval Academy acknowledged all of the deployed family members and friends in the printed ceremony program.

While the situation of a deployed service member might not be so common everywhere, I’ve never encountered a wedding where there wasn’t a need to acknowledge a friend or some family members who had passed away.  Like the Naval Academy wedding I’ve already mentioned, having an “In Memoriam” section of the ceremony program is very commonplace.  It’s a great way to include those loved ones without making the tone of the ceremony somber.  Others may choose to read the names allowed, or to light a memorial candle in their honor.

The trend that has really taken off in the last decade is the memorial table.  This is a small area, usually near the entrance to the cocktail hour or reception, where there are framed photos of the deceased family members.  This is often accompanied by a sign that acknowledges the thought behind the photos.  “Forever In Our Hearts,” is a popular sentiment for these signs. A memorial candle finishes the look. 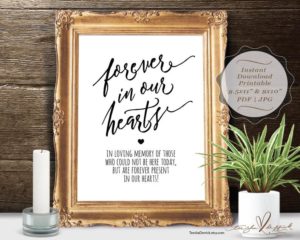 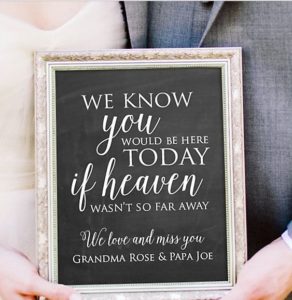 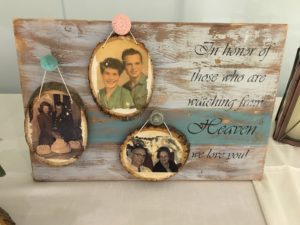 A few months before Katie and Andrew’s wedding, they experienced a sad, tragic loss.  The groom’s best friend, who had agreed to be the best man, lost his painful battle with cancer. Just before his passing, Katie and Andrew flew to Texas to be by his side while he married the love of his life.  It was his new wife, Jessi, who gave a lovely reading at Katie and Andrew’s ceremony, as a way of honoring their friend who had passed away.  They also decided to promote one of the groomsmen to “Vice Best Man.” This was done intentionally as a way of keeping the “Best Man” position open, so their dear friend was not being replaced in any way.

Sometimes a family member who is alive is not able to attend.  I recall a wedding we planned for Karen and Nick, where Karen’s father had a bad fall the night before the wedding, at the rehearsal dinner, and was hospitalized during the wedding.  He was unable to give his daughter away, and unable to dance with her in front of all their loved ones.  We skyped him in during the ceremony so he could watch Karen get married, and we cancelled the parent dances.  Nick didn’t feel right about having a special dance with his mother if Karen couldn’t also share a dance with her father.  Don’t worry, the groom still danced with his mother, just in a more inconspicuous way.  My favorite touch to the wedding was the bride’s bouquet.  Her grandfather had been a locksmith, so she had a key that had belonged to her grandfather, as well as her father’s wedding band, hanging from her bouquet wrap.  It was a beautiful personal touch for them. 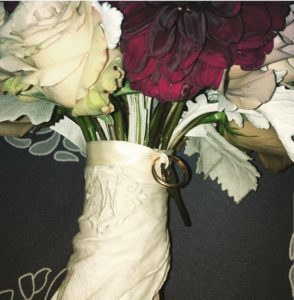 Whatever your circumstances may be, if you choose to acknowledge those who can not attend your wedding for whatever reason, think of what would be meaningful to you, and to them.  Even happy occasions can sometimes require a bit of remembrance.