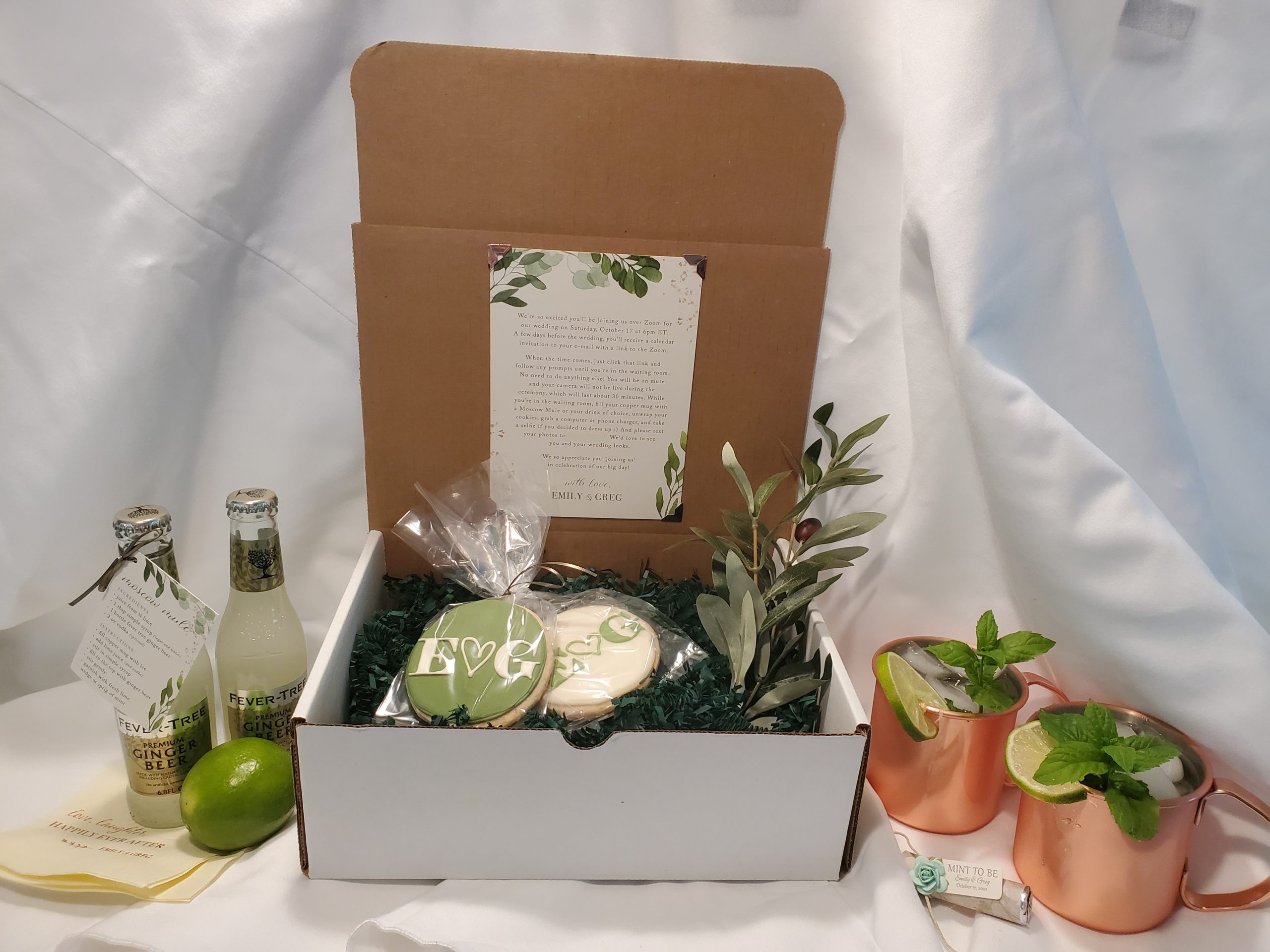 This year is weird.

Most weddings got pushed to next year, or the one after that.  But the ones who stuck it out with 2020 had to pivot.  We’ve heard that word more this year than we’ve ever heard before. (With the exception of one hilarious scene of Friends.) How do you have a wedding during a global pandemic? You can’t do it the way you would have done it last year.   You pivot.

Emily and Greg got engaged earlier this year, and had planned on a lovely fall wedding.  Greg’s mom, Debbie, and I had an existing working relationship, because our team had worked on Greg’s brother’s wedding a few years ago.  When Debbie called me a few months ago, I was delighted to hear from her.  She told me that Emily and Greg were very motivated to get married this year, but they were open to switching things up and not having a wedding celebration in the traditional sense.  Debbie had just hosted a virtual Bridal Shower for Emily a few weeks before this call, and she told me all about it: It was a tea party, and it was broadcast to friends and family via Zoom, and everyone had a blast.  But it wasn’t your normal Zoom conference call. Each guest was armed with everything they’d need in order to participate in the shower.  It was a “Tea Party in a Box.” There were game cards with a pen, custom cookies, flowers, and (of course) tea!

The whole thing was such a hit, Debbie wanted to do something similar for the wedding.   Emily’s mom, Lisa, joined us an the brainstorming began. What could we include in a box to make virtual guests feel like they were attending the wedding? We landed on a great collection consisting of:
The key elements of a Moscow Mule: a HUGE lime, Fever Tree Ginger Beer (the best kind, in my opinion), and, of course, the copper mug!  They had cute custom cocktail napkins. In lieu of cake, which would have been a nightmare to transport, we commissioned custom cookies from my favorite local cookie maker, Kim Steller of Steller Cookies. We also added a favor of custom mints. It all came together with custom stationery by mlc designs. We settled on a color scheme for everything and started packing!

A little bit about the logistics.

An electronic invite was sent out to everyone they wanted to include, and pretty much everyone would have moved mountains to be there.  Fortunately, all they had to do was log-on.

The first week in October, I mailed out packages to everyone who responded “yes.”
Exactly 122 “Weddings-In-A-Box.”

On their wedding day, an A/V crew set up multiple cameras in Lisa’s lovely back yard. There was a chuppah with a TV underneath, because the Rabbi’s officiated via Zoom as well.  Their Ketubah leaned on an easel next to the chuppah.  Nearby, parents and grandparents were seated with social distancing in a tent with open sides.

While guests waited for the ceremony to start, a welcome screen was up, and music that Emily and Matt chose was playing in the background.  Meanwhile, guests made their Moscow Mules at home!

Guests watched from the comfort and safety of their own homes, but they participated in all the best ways.  They toasted to the bride and groom with their mule mugs, and they ate their cookies. Some guests even got dressed up for the occasion.

The ceremony was broadcast in “webinar” mode, so the guests did not have audio capabilities. However, when the ceremony concluded, guests had an opportunity to post well-wishes for everyone to see.

Take it a step farther.

One thing they decided not to do, but would be a fun idea for anyone interested in hosting this type of virtual wedding, was virtual seating.  I had the idea of including “place cards” in the box. They would indicate which “virtual table” each guest was assigned to.  But these virtual tables would actually be break-out rooms in the zoom.  This is the kind of thing that is best managed by a professional video production company who can facilitate the logistics involved here.  It also requires some advanced planning, because you have to assign the people to groups in enough time to get the place cards printed and included in the boxes, which get mailed out a week before the wedding.  The bride and groom would treat the breakout rooms just as they would dinner tables during the reception. They would go from one to the next, visiting their guests.  But this means the others have to wait their turn. This is a great opportunity to add some more reception fun! You could have a playlist of songs you’d love to have at your wedding and allow guests to hear that while they’re in the break-out room, waiting for the couple to visit.  I am envisioning mini dance parties in everyone’s living rooms.

What would be in *your* Wedding-In-A-Box?

If you’re planning a wedding or other celebration in the near future, what would be in your gift box?