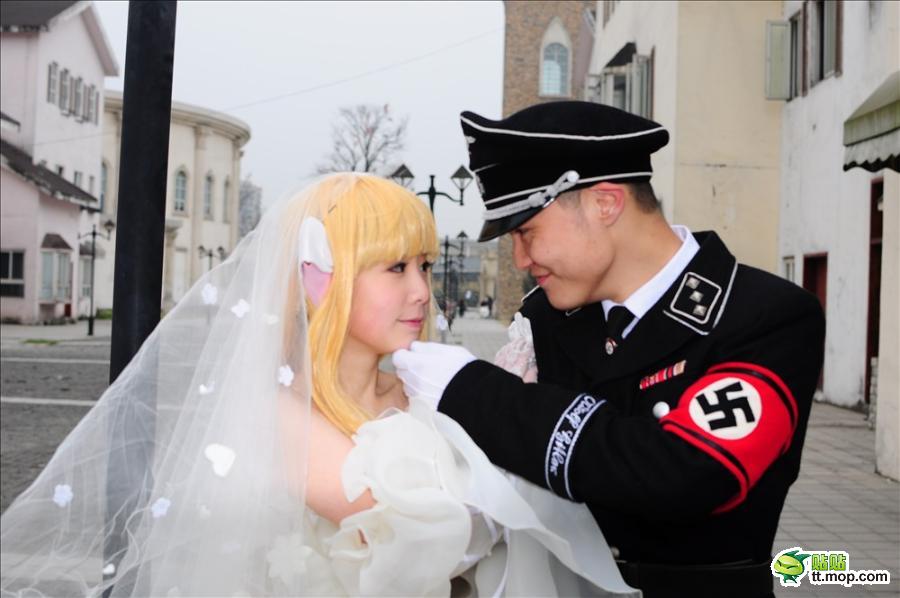 Nazi-Chic weddings are a Thing in Asia

So I want to talk with you about these Nazi-chic weddings in East Asia.  (I say that casually, like it’s a normal discussion that we’re having at my coffee table.) I try to make all my blog posts relevant to Plan It Perfect’s work, or at least to events in general.  This topic grabbed my attention as soon as I saw it, because I thought it was solely a wedding trend.  The more research I did, I found that it’s not just a wedding thing.  You might read the rest of this and wonder why I’m so off topic today.  (Like, “Hey are you a Yoga teacher? Because that was a STRETCH!) But I swear this whole thing was spawned by a wedding photo. 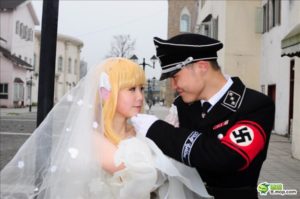 I had to investigate this image. Like an episode of “This Is Us,” I found more and more information, but the storyline of information was all out of order.  It was challenging to find where this trend came from, and where it started.  (Trend?  You mean this is not an isolated incident?!? That is correct.  This is a thing now.)

It turns out this image is from 2011, and Nazi-Chic became a thing in the early 2000’s.  Here’s what I can gather about what happened:

Someone in East-Asia (perhaps China) saw a photo of a Nazi uniform and thought it was a smart-looking outfit.  What’s not to like?  The fabric is crisp, the boots are cool, the armband is badass, and the hat is dapper.  That’s, of course, if you don’t know anything about this uniform and the people who wore it.  Apparently, that’s exactly it.  The guy who thought this uniform was so great actually had no idea what it was really about.  And neither did anyone in his sphere of influence who saw him don this outfit.  And why did they not know?  Because, allegedly… SCHOOLS IN EAST-ASIA DO NOT TEACH STUDENTS ABOUT NAZI GERMANY!  Like, they literally have no idea what happened in WW2, other than how it pertains to their own country.  So Japan knows all about the internment camps, the bombing of Hiroshima, and anything else on their soil.  Chinese schools only teach about the Chinese involvement in the war… and so on.  Get it?

That all being said, Nazi-Chic is merely a fashion statement in Asia.  It’s not a political, racial, or anti-Semitic statement at all.  Apparently, the US and Europe decided what the Nazi uniform stood for, and expected the rest of the world to agree.  Well, they don’t.  This is very similar to the word “fag,” which I’ll refer to as the F-word from this point forward.  It literally means bundle of sticks.  Harmless, right?  Until gay people started being burned at the stake, so they were referred to as “fags.”  Offensive to those who are aware of that connotation of the word.  However, other parts of the world, such as Great Britain, still understand the F-word to mean bundle of sticks, or even tobacco leaves, so they call their cigarettes “F-words.” So, basically, the Nazi attire is to East-Asia what F-words are to Great Britain… harmless.

Let’s also take a look at the Swastika, itself.  I know what it means to me, but I wanted to research the history of it.  I know the symbol has been around for much longer than the Nazi party, so it therefore has a very different meaning than the offensive and derogatory meaning it has to much of the world today.  Wikipedia defines the Swastika as “a character 卐 or 卍, a geometrical figure and an ancient religious icon from the cultures of Eurasia, where it is a symbol of divinity and spirituality in Indian religions and East Asian religions.”  No mention of the Nazi Party until the second sentence: “In the Western world it was a symbol of auspiciousness and good luck until the 1930s, when it became a feature of Nazi symbolism as an emblem of Aryan race identity and, as a result, was stigmatized by association with ideas of racism and anti-Semitism.”  So it might seem as though the people who originally thought this would be an edgy fashion statement thought it was an image that projected positivity a-la divinity, spirituality and auspiciousness, it’s hard to imagine that no one would have picked up on the newer meaning and let them know that the rest of the world is aghast at their choice of attire.  (Actually, one article I found cited that there was, in fact, some negative feedback, but the response was something to the tune of, “it doesn’t mean anything bad to us, so we’re not stopping this trend.”

So now that you’ve had a bit of a history lesson, topped with a vocabulary lesson, let’s get back to weddings. 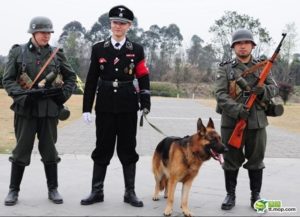 Now, I love a good theme wedding.  And, with any theme, it’s “go big or go home!”  So the Nazi-Chic wedding can’t just be about the Hitler-esque groom and his blonde Fraulein.  The guys on the far right and left in this picture are groomsmen.  And you might recognize that dog as a German Shepherd.  (As in, Adolf Hitler’s pet German Shepherd, Blondi… These guys totally knew what they were doing when they put this look together…) I was intrigued to see if anyone else had followed suit for an actual wedding, and my research turned up empty.  But with Nazi-Chic’s continued popularity for almost two decades, I’m sure it won’t be long before there’s another one.

For more cringe-worthy, immensely offensive wedding themes, check these out: the 5 most absurdly offensive theme weddings ever planned 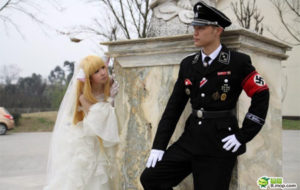